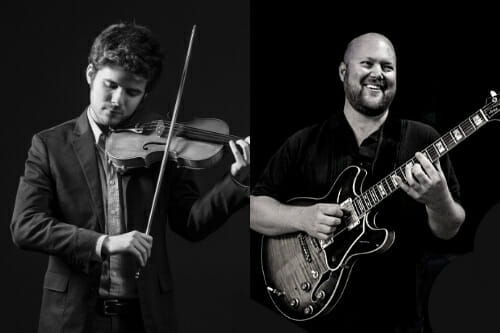 Proof of vaccine is required for this concert.

Described as “one of the greatest improvising violinists in America today” by virtuoso mandolinist/composer Mike Marshall, Alex Hargreaves is a fiddler who draws inspiration from a wide variety of genres and traditions. Based in Brooklyn, NY, Alex has toured with Jerry Douglas, David Grisman, Bela Fleck, Danilo Perez, Sarah Jarosz and has performed with many others including Punch Brothers, Sierra Hull, Steve Martin and Kacey Musgraves, appearing on her Saturday Night Live debut. He was a member of the Grammy award-winning Turtle Island Quartet from 2016–2019, appearing on their 2018 release, Bird’s Eye View, and can often be heard playing in the house band on the public radio variety show, Live From Here with Chris Thile. Currently on faculty at The New School, Alex is an experienced music educator, having taught at a variety of music camps and workshops including the Mark O’Connor Fiddle Camp, Swannanoa Gathering, Augusta Heritage, Christian Howes’ Creative Strings Workshop and the Mike Block String Camp. He also teaches privately in Brooklyn and online. With a strong emphasis on ear training, Alex helps his students find their own way of learning and staying inspired, while still respecting the traditions and contributions of those who set the groundwork for the music we play today.

Adam Larrabee has appeared as a sideman on Bruce Hornsby’s album “Spirit Trail” and has involved himself in a wide variety of projects in the past few years from playing banjo in the bluegrass group “Joy Kills Sorrow”, guitar in the chamber-jazz group “Andromeda”, classical mandolin with “The Richmond Classical Guitar Quartet” and mandocello with “Enigmatica”, recording and performing with rising jazz prodigy Grace Kelly, and his exploration of the music of Central France with “Le Bon Vent”. In 2006, he won an Independent Music Award for his composition “Norwegian Slip” in the world/fusion category. Most recently, Adam has released a duo CD with pianist Bob Hallahan entitled “The Street Where You Live” in addition to a recreation of Duke Ellington’s classic recording “Money Jungle” recording with his current trio with drummer Brian Jones and bassist Randall Pharr. In October 2009, Adam played banjo with “Love Canon”, backing up rising pop/folk star Josh Ritter on a sold out two week tour of Ireland. In Oct 2010 Adam traveled to Ankara, Turkey for the Haceteppe Konservatory Jazz Festival and played in the premiere of “Ben Seni Variations” a work for Orchestra and Jazz Octet by Doug Richards. Adam taught jazz theory, composition and arranging at The New England Conservatory in Boston for nine years and currently lives in Charlottesville, Virginia and teaches classical and jazz guitar at Virginia Commonwealth University in Richmond, banjo and mandolin at the University of Virginia and improv and small jazz ensemble at James Madison University in Harrisonburg.